First Gig for Frozen Echo with Kelly and Joe

The Frozen Echo band played its very first gig since Kelly and Joe joined the band back in February, 2017. It was a cool-ish Saturday, September 9th and the place was a friendly one—guitarist Marc’s cottage near Wakefield.

We had a small, invited audience of about ten or twelve people plus several neighbours that dropped by after hearing the band play.

After setting up all of our equipment, which finished just before three in the afternoon, we played our first set. The set included the following songs: 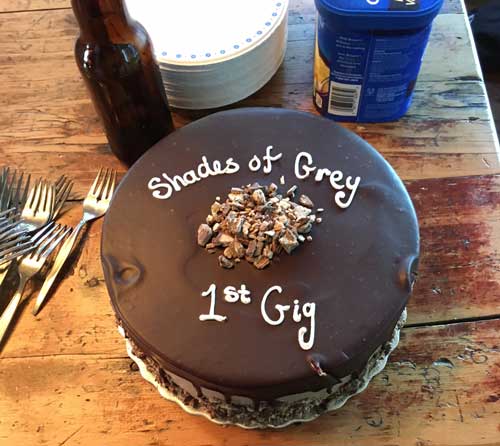 Shades of Grey celebrate their first gig at Marc’s cottage on September 9, 2017.

We also played Samba Pa Ti after the afternoon set ended. It was the first time the band played that song, so it was more of a jam session than a typical performance.

After our afternoon set, we had supper with the band and our invited guests. For dessert, Marc surprised us all with a special cake to celebrate this event, the first gig by Shades of Grey since Kelly and Joe joined the band back in February, 2017. Great food and great conversation were enjoyed by.

It’s taken a lot of time and practice to get here, but it’s been well worth it.

For our evening set, we played a shorter set than we did in the afternoon. By the end of the set, it was getting dark, a hazard of late summer outdoor evening performances.

We played the following songs in our evening set:

We had a great time and we are really looking forward to setting up and playing our next performance.